As previously reported here, the Irente planting site in the Usambara Mountains region of northern Tanzania spreads across 2,200 hectares.  There are one million trees here, but there is a real need to get another two million trees planted in this area as soon as we can do so.

In late 2021, ForestPlanet helped get the first 275,000 trees planted in this region.  In June 2022, we visited Tanzania to meet our local tree planting partners and check on the project’s status.  The trees were planted in three different areas. This post will update you on the Irente #2 site: the Mlesa Spring.

The Mlesa Spring provides drinking and irrigation water to thousands of people residing downhill in the Irente Villages area.  ForestPlanet helped distribute 68,000 trees directly to these village residents as part of the Irente project, described here.

For this initiative, our partners planted 69,000 trees near the Mlesa Spring construction project, called an intake, which was built in 2002.

Below is a photo, taken in August 2021, of the Mlesa site.  The intake is designed to hold water and smooth out the flow that eventually goes downhill to the Irente Villages area.  While there is some water in the tank area, note that the flow of water is very low: only a tiny amount is released through the gap. 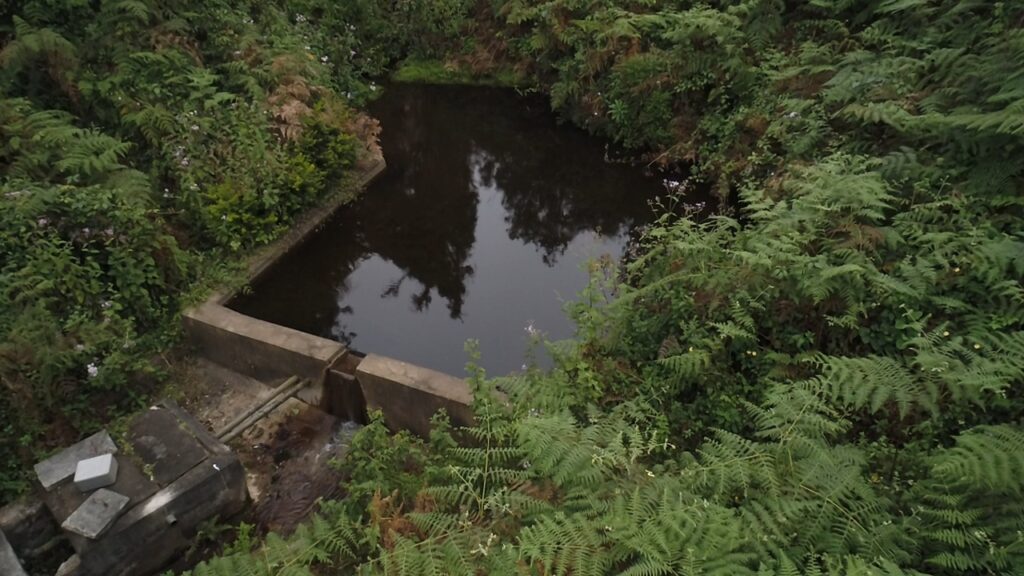 As recently as ten years ago, there was a significant and constant water flow over the top of the intake.  During that time, most of the trees surrounding the area were destroyed by fire or encroachment, and the water levels dropped as the root systems died.

In the picture above, the area is surrounded by low-level ferns and other bushes, which filled the space once the trees were gone.  While these plants look green and lush, their root systems are not deep and consequently do not capture large amounts of rainwater.

In November 2021, ForestPlanet helped fund a project that cleared the area around the intake and planted 69,000 trees.  Fast-growing “water resource” species were chosen, which typically have straight and deep root systems.  Consequently, the trees could be planted closely together to form a series of barriers for rainwater as it flowed down the mountainside. 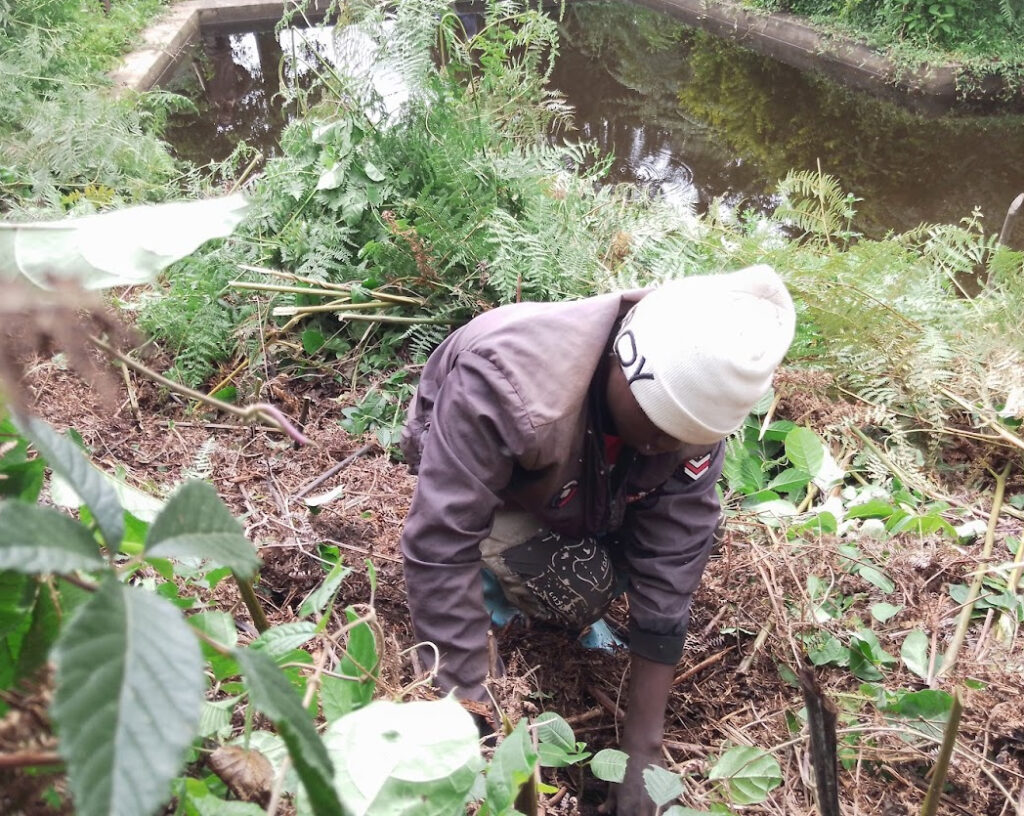 Our local partners worked with Village elders to raise awareness about how tree density impacts water security.  Providing residents of the villages with their own trees, i.e. the Irente #1 project, reduces economic pressure to encroach upon the surrounding forests. 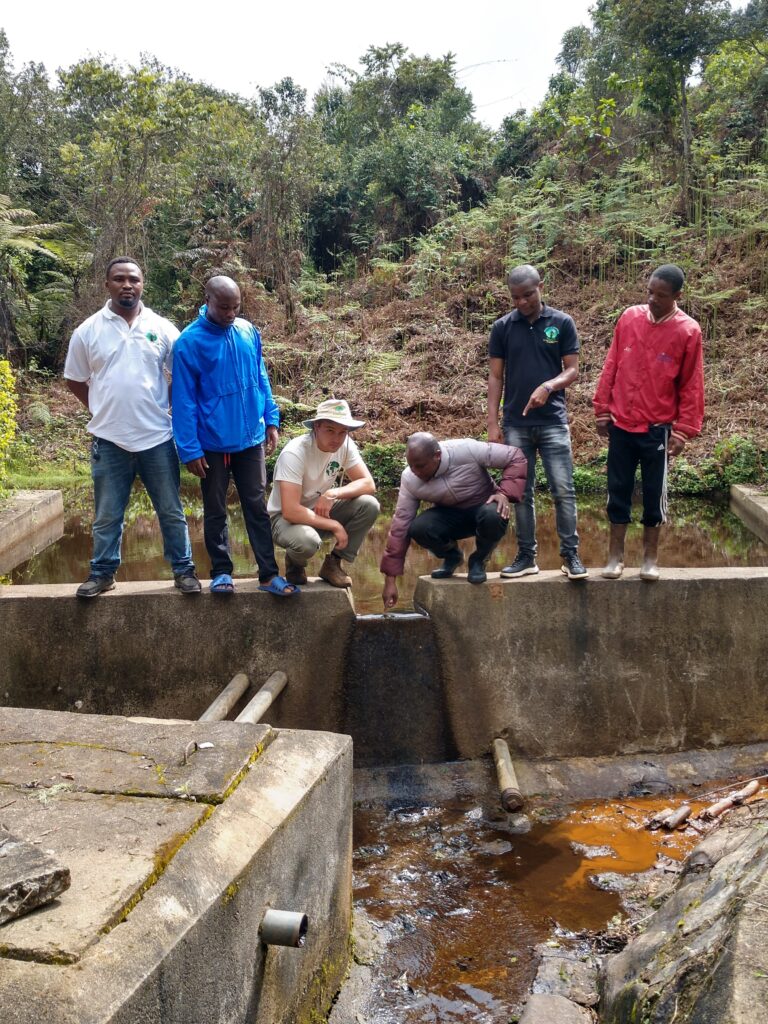 ForestPlanet visited this area in June 2022, nine months after the trees were planted, to see the results.  This is the beginning of the dry season, as reflected by the very low water level in the photo above.  However, note the background: the low-level ferns were removed by our local partner and the new trees are visible. Help is on the way! 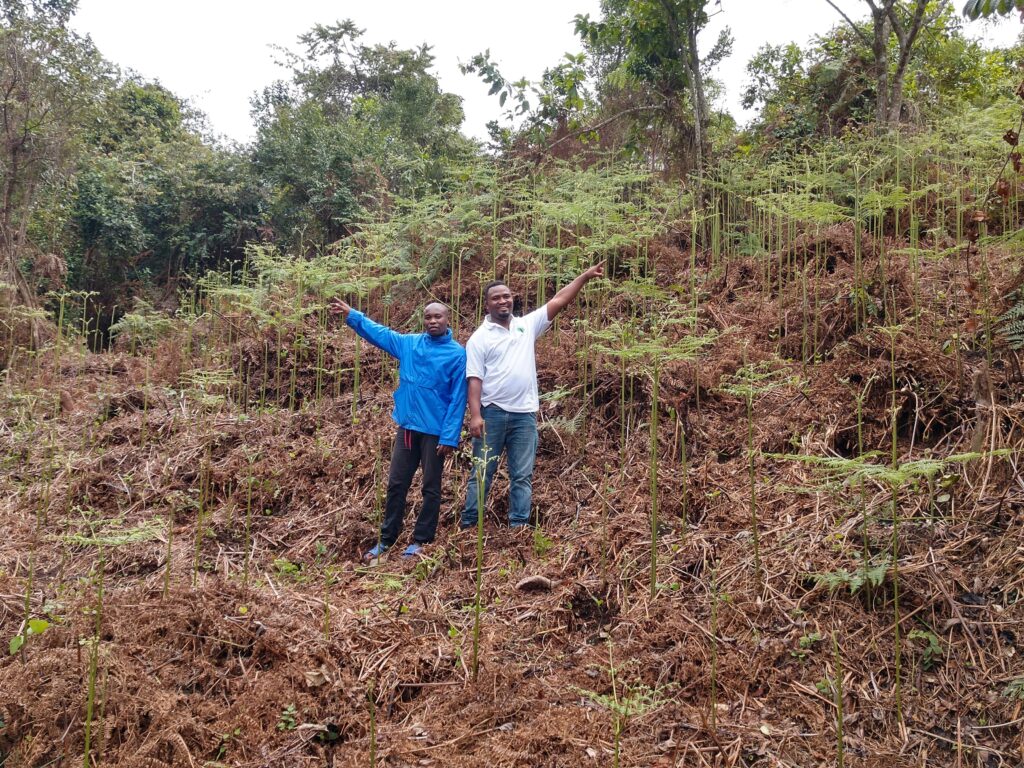 Nature is doing her magic!  The trees pictured above have doubled in size since being out-planted less than a year ago.  The healthy seedlings came from a well-run nursery nearby, so at this point, survival rates are about 95%.  Any dead trees will be replaced during the next rainy season, beginning in October 2022.

It will take five or six years before the new trees start helping the water table.  The trees will need to grow to a height of four to five meters before having a significant channeling impact on the rainwater.

Patience is required, but… we’re patient tree people.  Some of the species of trees that were used are listed below, along with their additional benefits.

Trees are essential for many reasons, carbon sequestration being one of them, but more and more research suggests that trees play a critical role in the water cycle.  Stories of water shortages appear in the press every day, and no doubt it’s a real problem worldwide.  In many cases, water situations can be improved relatively quickly with well-executed forest restoration projects.

With your assistance, ForestPlanet can methodically address problems like this, one planting site at a time.  There are many more potential planting sites like Mlesa Spring in Tanzania alone, and thousands more worldwide.  Our goal is to help revitalize them all.  At 15 cents per tree, even a $15 donation can go a long way, and we welcome your support here!

The next installment in this series can be found here: ForestPlanet Visits Irente Planting Site #3 In Tanzania: Forest Restoration