In the underdeveloped world, or in overdeveloped cities, more trees are needed 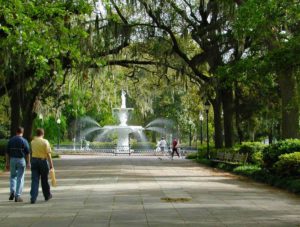 When it comes to trees, there’s just no end to the amazing things these greenhouse gas-eaters an do. Among their many benefits, trees and green spaces help reduce urban air pollution and lower temperatures in sweltering cities, as a recent article from the United Nations Environment Programme explains.

Because people don’t have to crank up their air conditioners as high as they would in direct sunlight, tree cover also reduces related fossil fuel emissions by as much as 40 percent, according to the article.

Another study looked at the effect of urban trees on reducing airborne particulate matter, usually the result of diesel emissions, and found that certain species of trees worked best.  The winners were silver birch, elder, and yew trees, since they all reduced the smaller particulates, which are particularly worrisome.  “Evidence has stacked up for the ill effects of minuscule particulates, with studies linking them to asthma, stroke, heart disease, diabetes, obesity, and dementia.”  These are significant public health issues that can at least be mitigated by the simple act of planting the right species of trees, and in the right locations.

With Earth’s population, and the number of people living in cities, projected to explode in the coming decades, the United Nations has declared the UN Decade of Ecosystem Restoration 2021-2030 to turbocharge tree-planting projects around the globe. In September, the world body will be unveiling an ambitious effort to build a “Great Green Wall of Cities” in and around 90 cities in arid Sahel region of Africa and Central Asia by 2030.

What a great idea! ForestPlanet, which has planted over 60,000 trees since 2017 with support from multiple business partners, is pleased to join the United Nations in this urgent effort.