Blue Carbon…it’s all in the mud

‘Blue Carbon’ is a blanket term for carbon captured in and around the world’s oceans and supporting ecosystems. The carbon captured by living organisms in oceans is stored in the form of sediments from mangroves, salt marshes and sea grasses.  ForestPlanet is determined to help replace mangrove trees, which survive in both salt-water and fresh-water environments along ocean coastlines.  Besides sequestering carbon, mangrove trees create the perfect breeding environment for multiple marine species at the base of the food chain. 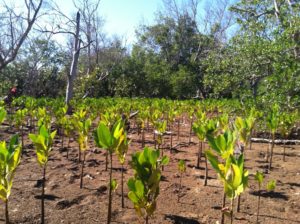 Carbon sequestered by mangroves does not remain stored for decades or centuries (like for example rain forests), but rather for potentially thousands of years.  Where is all this carbon stored?  Like other ‘normal’ trees a good amount of the carbon is stored in the form of the tree’s biomass: the trunk, limbs, roots and leaves.  However, a greater amount of carbon in stored in the mud surrounding the mangrove tree’s roots.  How did it get there?

A mangrove tree ‘breathes in’ CO2 like any other plant, but at a much higher rate than other trees, i.e. up to four times more CO2 than a rain forest tree.  A majority of this CO2 is then secreted into the surrounding mud via the mangrove tree’s extensive root system.  This ‘carbon goop’ is like very fertile glue, as it helps secure the mud and sediment against the stress of the tides.  And given the high carbon content, this goop creates a friendly environment for microbial development and other components that make soils life sustaining: it’s basically prime nursery habitat for multiple species at the bottom of the marine food chain.

The Earth’s mangrove population has decreased by ~3.75 million hectares since 1990, or roughly 38 billion trees.  The removal of these trees has resulted in the release of millions of tons of carbon into the atmosphere in a very short time, carbon that had been buried relatively deep within the soil.  ForestPlanet’s tree planting partners are valiantly replanting mangroves by the tens of millions of trees each year, but quite simply the pace needs to quicken drastically.  It is the intention of ForestPlanet to raise the awareness of these heroic efforts, and to raise the necessary funds from our wonderful business partners to significantly pick up the tree-planting pace.